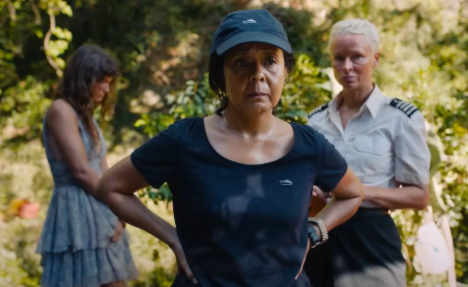 A shot from the third section of Triangle of Sadness. Pictured left to right are Charlbi Dean as Yaya, Dolly De Leon as Abigail, and Vicki Berlin as Paula.

A shot from the third section of Triangle of Sadness. Pictured left to right are Charlbi Dean as Yaya, Dolly De Leon as Abigail, and Vicki Berlin as Paula.

‘Triangle of Sadness’ was initially released into select theaters on Oct. 7, 2022. Within film circles, the movie has been highly anticipated, especially considering the fact earlier this year, it managed to receive the Palme d’Or at Cannes Film Festival. Outside of these niche communities though, it is likely that most people will not have heard of this movie and have no current plans to see it; this is an incredible shame.

The film is broken up into three sections. The first takes place surrounding a meal as two well-off fashion models argue over gender roles and who ought to pay the bill for that night’s dinner, the second section of the film focuses on a cruise ship filled with the hyper-wealthy as imminent disaster slowly builds ahead, and the third and final section focuses on those same wealthy inhabitants of the cruise ship as they end up being forced to survive on a deserted island.

Throughout each section, it explores themes of Social Class, Power, and Industrial Capitalism. While it can be a bit on the nose, – at about its midpoint, one of the characters practically turns towards the camera and says what is essentially the film’s thesis statement – the actual themes being explored and the ideas being put forward are still incredibly interesting if also rather dower and cynical. In fact, those ideas here are incredibly similar to those expressed in works like Slavoj Žižek’s ‘The Pervert’s Guide to Ideology,’ though they may be expressed in a distinctly different format.

At its core, ‘Triangle of Sadness’ is a black comedy and one which sets its sights on the rich and powerful. At this, the film is remarkable. Especially in watching it with an audience, much of the movie’s absurdity and rather dry humor shine brilliantly. One particular cutaway gag that marks the split between the film’s second and third parts may just be one of the funniest I’ve seen.

That said, for a few sections of the movie, jokes can become rather sparse. While this is often used more as setup for later, or for establishing its central themes, these moments can end up leaving the viewer with only its cynical tone, and a sense of general absurdity. Though, as the movie goes on, the jokes tend to pick up in pace while the scenarios the characters find themselves lost within become increasingly outlandish.

Given the premise of each section of the movie, it is likely that most attentive viewers will be able to easily predict where things are going. This is not to say that the movie is at all cliche or detrimentally predictable, but rather that it isn’t at all concerned with being unpredictable or subverting the audience’s expectations. It seems to be aware that the viewer can piece together what is about to occur, and so it spends its time building anticipation and not suspense. Things are likely going to play out as you expect, and this is by no means a bad thing. It is in essence, a masterclass in dramatic irony. In conjunction with a constant and methodical pace, it can end up feeling like you are watching a disaster occur in slow motion; by the midpoint of the second section of the film, it became nearly impossible to take my eyes off the screen.

Stylistically, I find the movie to be most reminiscent of the works of Jacques Tati; ‘Playtime’ in particular seems to be a rather strong influence here. The Captains Dinner in Triangle of Sadness shares a significant amount in common with the dinner scene from Playtime. The chaos in either feels as though it is cut from the same cloth, and in both cases is incredibly satisfying.

While it may not be for everyone – its slow pace and cynical themes may hold it back from the mass appeal that usually draws general audiences – I thoroughly enjoyed every second of its runtime. With all this in mind, I would rate Ruben Östlund’s ‘A Triangle of Sadness’ 9 out of 10 stars.