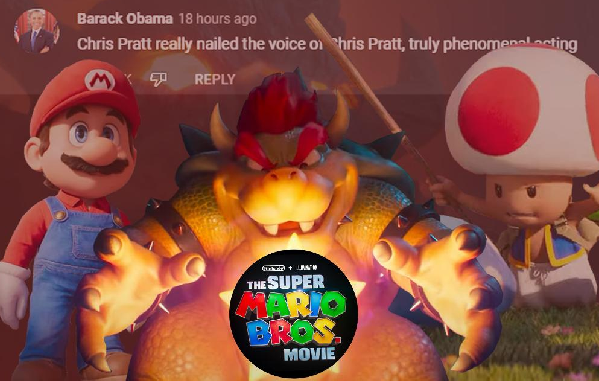 A collage of stills from the Trailer. Image edited by Justin Hall. All rights to ‘The Super Mario Bros. Movie’ are owned by Nintendo and NBC-Universal.

A collage of stills from the Trailer. Image edited by Justin Hall. All rights to ‘The Super Mario Bros. Movie’ are owned by Nintendo and NBC-Universal.

On Tuesday, Oct. 4 Nintendo of America’s Twitter page announced the release of a trailer for the much anticipated Mario Movie. Two days later, on the 6th, that trailer got released in a ten-minute Nintendo direct which was streamed on YouTube and shown simultaneously at New York Comic Con. Reactions to it were immediate and rather varied. Across the board, it seems most viewers are generally excited about the movie. However, some are excited for very different reasons than others.

This is not Nintendo’s first attempt at producing a Mario movie either. In 1993 a film entitled ‘Super Mario Bros.’ was released which soon became an infamous cinematic failure. Many fans of the franchise have criticized this older film stating that the characters and world the film depicts were simply nothing like the video games that they were supposed to be based upon, and that the plot of the film did not resemble that of the games in any way. Even with the Mario elements – or lack thereof – aside, the film was also criticized for being difficult to follow and generally poorly written.

Perhaps because of Nintendo’s previous failures, many have criticized the very idea of producing a Mario movie, arguing that there is little cinematic story potential to be found within the traditional Mario game structure. These criticisms only became most apparent in 2017 when it was announced that Nintendo had partnered with Illumination to create another Mario Bros. movie. Immediately many were incredibly dubious of the film’s potential quality, and this was only heightened by Illumination’s mixed reputation as an animation studio.

Fears surrounding the movie were only heightened when in 2021, the cast list was released. With actors such as Jack Black, Keagan Michael Key, Seth Rogan, Anna Taylor Joy, Charlie Day, and Chris Pratt helming the major characters in the movie, some commentators went so far as to question whether or not the list was simply an out-of-season April fools joke. A number of compilations of reactions to the cast reveal have been posted on YouTube, typically depicting outrageous laughter, intense confusion, or a combination of both.

In the trailer for this new outing, it seems notes have been made to improve significantly upon past mistakes; Character designs and the general world seem to be incredibly close to their game equivalents, though with a high-budget animated sheen added on top. While the story of the movie still remains unknown, it does still seem to take place in a very similar world to that of the games, and with only a few exceptions, the chosen voice actors do still manage to sound like their video game counterparts, and from an animation perspective, it is difficult to deny that the clips shown in the trailer are incredibly well crafted, arguably far more so than Illumination’s other outings.

This is not to say that the reception of the trailer was entirely positive. One particularly prevalent criticism was of Chris Pratt’s performance as the titular Mario. In the day since the trailer’s release, a large number of memes and jokes have already been produced poking fun at this.

In any case, some excitement around the film persists even while many still see it in the context of ironic humor. The Super Mario Bros. Movie is set to release on April 7th, 2023.