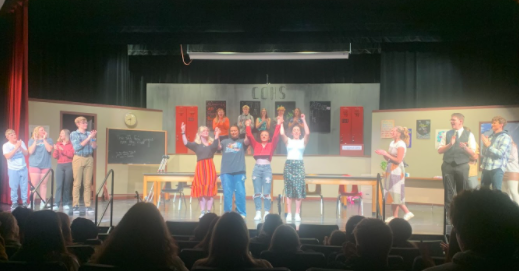 The end of the performance on Friday, Nov. 11. All of the crew came on stage and the crowd went crazy in congratulating them on an amazing performance. (Rylee Gallaher)

The end of the performance on Friday, Nov. 11. All of the crew came on stage and the crowd went crazy in congratulating them on an amazing performance.

“Up the Down Staircase” Performed by PCM

With the Fall Play coming to an end, the senior group had a lot to say about the production, “Up the Down Staircase.” The performances took place last week on Friday, Nov. 11 at 7 p.m., Saturday, Nov. 12 at 7 p.m. and Sunday, Nov. 13 at 1 p.m. With this production having a more serious topic compared to the past few years many audience members did not know whether or not to clap or continue to be silent at a joke about a serious issue.

“One thing that I am looking forward to would be the laughs and the reactions that we will get.” stated Alleger. “It is different than what we normally do, it is more serious, and an easier thing for me to do and with an important message.”

In preparation for the performances, the crew has been having practice everyday from 5 p.m. to 8 p.m. running through everything that they think they need to work on. One of the most important things to do on a daily basis outside of practice is looking at your lines and spending time running through it on your own.

Everyone prepares differently, but Kinnoman states, “I do a lot of looking through my book and reading through my line over and over again.”

One thing that is important in performing is a person’s attitude. Dedicating a ton of time to practicing and perfecting all of the actions and lines takes a positive attitude.

“Having practices 5-8 everyday and studying over lines and showing up with a good attitude” stated Davis.

Having the main character can be very difficult, but with the help of others it can be made into an easier task.

Kinnoman exclaims, “I am really thankful and it was a great opportunity. I am really happy with how everything turned out. Keeping the team morale up and keeping everyone working together even without the seniors will help us next year.”