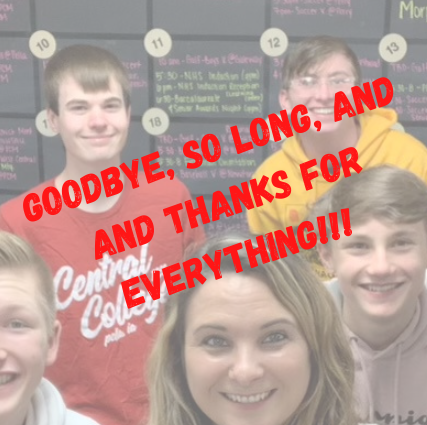 This is it, guys. This is the end, but also the beginning of a new chapter in our lives. Sure, I’m moving on and going away to college where I will meet new people and see new places, but I leave behind so many amazing people and memories. I want my last contribution to be something special, so I decided to make this for all of you, to recognize you.

Journalists don’t get the respect they deserve, especially those in a small high school in Iowa. Most people don’t get to see all the hard work and effort that goes into each and every story. Because of this, I want you to know that people recognize your efforts and respect you as journalists. I want everyone in the world to see you as I see you: hardworking, kind people.
Journalism is not a person or a thing, it is the PEOPLE. It is everybody who works together to spread information. It is the editors, advisors, the storytellers, and the photographers. It is each and every one of you. You are the future, leave your mark on the world.

Zach Roorda – Honestly, I’m pretty sure Zach is a synonym for airplane. But just to be serious for a minute, I really have enjoyed listening to Zach talk about planes. It’s amazing to see someone talk so fervently about something they love. If I ever find enough backbone to get on a plane, I hope that my pilot will be Zach (even if everyone on the plane gets to listen to the history of the P-51 Mustang for the entire flight). Reach for the stars, Zach, because I’m sure you’ll already be in the sky.

Emma Hiebert – I don’t find many people who share my taste in music. When I meet the rare person like Emma that knows the same bands I do, I get excited. Most people couldn’t give two craps about my kind of music, and more often than not I get things like, “I don’t know that band,” “That’s not really something I like,” or my least favorite, “I didn’t think you were the kind of person that likes that kind of weird music.” These kinds of comments made me want to hide what I loved. I stopped wearing my band shirts, stopped listening to certain bands at school, and stopped talking to others about music. And it sucked. I like to talk about my bands. I like it alot. It’s one of my favorite things to do. Getting to spend time talking with Emma about Foo Fighters (RIP Taylor Hawkins) and Soundgarden (RIP Chris Cornell) was some of the most fun I had. The best advice I can give to you is to not be afraid to go against the grain. Letting others dictate what you do will make you feel worse than anything they can say to you. It’s your life, be yourself. Nothing compares 2 you.

Eleigh Davis – I’ve known Eleigh for a very long time. So long, in fact, that I knew her when her mom was still teaching Kindergarten. On my first day in Journalism my sophomore year, she was the only person in there who didn’t scare the absolute crap out of me (although she was still scary). I have had the unique opportunity to learn how to write with her, to learn AP style and photography with her. Eleigh, never let anyone stop you from being you. If you want to write something, write it. If you want to start something, start it. Take risks and be bold and I am sure that nothing in the world could stop you. I’ll be rooting for you.

Gabe Graber – When Gabe came up and asked me what an editor did, I had a light bulb moment. “Gabe,” I said, “Do you want to be an editor next year?” One of the things I’m always looking for in an editor is ambition, wanting to take on all the responsibilities and difficulty that the position details. I saw it in RaeAnn, I saw it in Jack, and I saw it right then with Gabe. Gabe looked at me, nodded, and said yes. So I started training him up, putting more emphasis behind what an editor did and why. Hopefully he achieves his goals, but I want him to know that he has earned with all of the hard work he has done. The best advice I can give him is to be more confident. Act like nothing is difficult and be brave. You will go far.

Johnny Jarnagin – Me and Johnny have had a turbulent history. When I was younger, I had issues controlling my temper. I’d fly off the handle for stupid reasons, never really thinking before acting. It took a long time, and a LOT of work for me to be able to finally control my emotions and be the person I wanted to be, and I’m still working on it today. Johnny came to PCM Elementary late – most of us had been there since preschool and it took a while for people to get to know him. Like anybody I met for the first time, I tried to treat Johnny fairly and respectfully. But there was a moment when everything came to blows between us. We had a small fight, broke it up, apologized, and moved on, but I was still mad. But I was not mad at Johnny, I was mad at myself. I let my temper get the best of me and I disappointed myself. Johnny, I want you to know that ego and emotions are always the hardest parts of a person to change. If you start acting like the person you want to be, eventually you will become that person.

Jack Eighmey – I hated Jack when we first met. It’s true, something about him ticked me off. The only problem was that I couldn’t seem to figure out why. He turned his work in on time and turned in good work, which were the most important things to me. And then it struck me. I was jealous. Jack seemed to get along fine with anyone and he picked things up way faster than I ever could. He did things that seemed extremely difficult to me with ease, leaving me feeling like I wasn’t really needed in class. What, I wondered, was the point of me editing or writing anything if Jack could do it better and faster than I could? The more I got to know Jack, the more I realized that my jealousy was unfounded. Jack was a great guy who is willing to work hard for what he wants, and having someone in class like him gave me more time to pursue stories that I wanted to do. He is one of the people that come to mind when I think of hard workers; I hope he continues to work hard without me next year. Good luck Jack, I can’t wait to see what you will accomplish.

RaeAnn Duinink – I must have rewritten this part more than ten times. It’s hard to find the right words to truly express your relationship with a person on paper. So since I can’t seem to find the words, I’ll just keep it short. RaeAnn, I wish you the best of luck next year. Always be yourself, and never take any crap from anyone. Never be afraid to speak your mind, stay courageous, and stick to your beliefs. That will take you farther than anything else. You’ve got this!

Mrs. Grett – “Mrs. Grett hates freshies.” That was the message scrawled on Mrs. Grett’s whiteboard my freshman year. To be honest, I was scared. I was scared of writing. My history with the medium was shaky. In elementary school I both won writing contests and failed at them miserably. But one day a senior in Journalism came into my English class. I can’t seem to recall if it was Wes Cummings or Olin Minders, but he gave a presentation about Journalism before we made our schedules for the next year. I don’t remember what it was that made me put down the class on my schedule and I don’t know what stopped me from dropping the class at times, but I do know that whenever I was frustrated, whenever I was scared, tired, freaking out, or ticked off Mrs. Grett was there. She was there with compassion, understanding, and grace. Mrs. Grett gave me this opportunity that I wouldn’t trade for all of the silver in the world; I have already found all the gold in the world in Brooke Grett’s heart. Mrs. Grett, thank you for everything you have given me and changing my perception of the world.

Incoming Journalists – So, you’ve decided to take Journalism. You’re either calm or freaking out. If you’re in the former, get scared. If you think that Journalism will be a cakewalk and all you have to do is make TTV segments, you’re dead wrong. But if you walk into the room, anxious and sweating, you will almost certainly succeed. For you, I leave this advice: try new things, be kind, grow, accept defeat, but don’t give up. Giving up teaches you nothing and leaves you with nothing to say. Finish and fail and you will always be able to say, “I grew from that.”

I have found that the last words are always the trickiest; it’s hard to say goodbye, even harder when it’s to people close to you. I wish there was a why to express how much you all mean to me, but as someone once told, there is no such thing as a perfect goodbye. You can try to wrap everything up with a tidy little bow and walk away feeling like you made a great final impression, but the truth is, nobody remembers the last thing that someone says to them; they remember the moments where they laughed with you, talked with you, cried with you. All I’ll ask from you is to remember our time together.

To end this, I want to thank you, each and every one of you. You are all angels in my eyes. Give life everything you have, leaving nothing back. Sincerely, Christopher Ver Heul. I thank you for your time.