PCM baseball to begin May 28 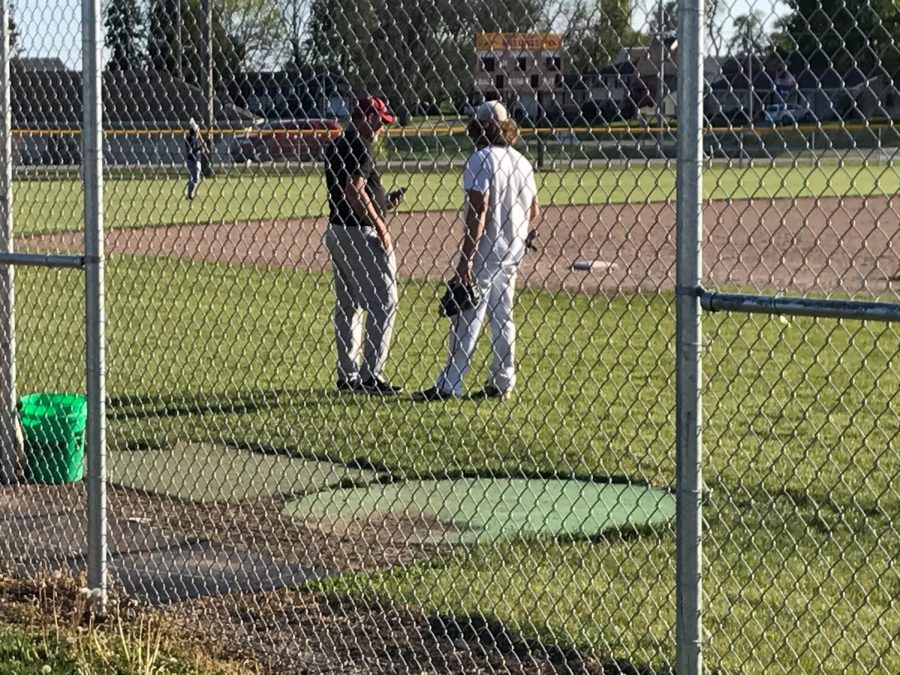 PCM senior Caleb Duinink (right) talks with head coach Jeff Lindsay (right) at baseball practice. Duinink will start at catcher for his final season after starting throughout his high school career. Lindsay is always getting him to improve. The 2021 season will start on Monday, May 24, against Pella at Pella High School.

PCM baseball is just around the corner and this year will be a little more normal. Last year was a shortened season because of COVID-19, but this year will have the regular season schedule of 18 games plus playoffs. The Mustangs will have six returning starters this year in Andrew Mitchell, Sage Burns, Beau Webb, Connor Bennett, Caleb Duinink and Durant VanDyke. Their roster includes 6 seniors. After losing pitcher and third baseman Derek Brown and other starters last year, there will be roster spots to fill. The Mustangs finished 7-9 (6th in the Heart of Iowa conference) and PCM head coach Jeff Lindsay had some things to say about expectations as the season approaches.

“I have high expectations for this group of guys. We have a veteran group coming back, [but] we did graduate some guys last year, but we have a nice group coming back with a lot of experience. There are gonna be some places that we are going to have to put some new guys in and I expect we will be a real competitive team this year,” Lindsay said.

Last year, the Mustangs went 7-9 and finished third to last in their conference. Clearly PCM should compete better than that this year, especially if every player continues to improve consistently across the year.

“A lot of the returning guys have shown improvement since last year. As of now, just watching the guys that are returning from last year, I’ve seen a lot of growth and improvement from all of [the players],” Lindsay said.

Lindsay also pointed out that not just one player has shown more improvement than everyone else, but rather a consistent foundation of improvement has been established by everyone. That can lead to strength as a team.

“The three faucets of the game, our pitching, our hitting and our defense, we’ll be solid at. That’s a good thing, because it means we’re showing a lot of consistency,” Lindsay said.

With strengths, there are also weaknesses, and one of them for PCM could be not enough depth.

“Whether it’s behind the plate, on the mound, infield, or outfield, we have a scattering of those older guys. [Hopefully] that experience is going to help lead [the team],” Lindsay said.

“We have to fill second base, first base, and outfield spots. And when we have certain guys that need to pitch, then we have to have guys that can step in and play their [original] position in a quality manner. We also have to have a quality backup catcher because Caleb [Duinink] will be doing a variety of things,” Lindsay said.

Duinink will be a leader on the team this year, being a three year starter and a senior catcher. He isn’t worried about his role, though.

“My biggest strength would probably be leading. I kind of keep everyone cool. And being a catcher, I have to be the general of everything,” Duinink said.

Mental capacity always comes before physical strength, though, and Lindsay wasn’t really worried about that for the Mustangs. So far every player is excited about the season.

“So far [in practice] the attitude has been great. These guys come to work every day. They listen, they ask what can they do better, how can they continue to improve. Asking questions is a good thing because it shows me they want to continue to learn,” Lindsay said.