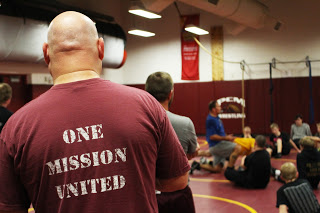 “[I’m looking forward to] watching this young team improve and get better as the season progresses.We have only one senior this year, and he hasn’t wrestled since ninth grade.  We will need the younger guys to step in and contribute right away. I know they’re capable of doing that,” Head Wrestling Coach Cory Waddell said.
Waddell is returning for his fourth season as head coach. “Each year we believe we can compete for a Conference title. This year is no different.”
The varsity roster lost five wrestlers due to graduation, one being the 2A State runner-up in the 126-pound weight class, Tristan Clark. Jaret Maggard who wrestled in the 182-pound weight class, 160-pound Skyler Koder, heavyweight Trenton Malone and district qualifier in the 170-pound weight class Ron Marshall were among the graduated wrestlers, as well.
“Filling weight classes is an issue,” Waddell said. “We will not have a 220 or 285, most likely. That might hurt us in some duals.”
Though the team has some challenges facing them in the 2015-16 season, they also have some advantages.
“Coach Teeter brings a ton of experience to the coaching staff. As a former head coach and two-time District Coach of the Year, his knowledge and skills are always welcome on our team,” Waddell said.
Matt Teeter is returning as assistant coach this season. Before Waddell’s reign, Teeter was head coach for five seasons, leaving to hopefully spend more time with his family. He returned because he missed coaching the kids.
Returning 2014 and 2015 district qualifier, junior Xavier Miller, will help lead the team, and the freshman class has some promising talent, as they house multiple AAU State medalists and qualifiers. Among them is freshman Wes Cummings. Cummings is a two-time AAU State champion in 2013 and 2015. His goals for the season are “to go out there, be a team player and embrace the grind.”
Cummings said, ”I’m looking forward to working hard with my friends doing one of my favorite sports.”
Come support the Mustang wrestlers at their first dual in Newton against the Cardinals on Thursday, Dec. 3, at 7:30 p.m.